This year I spent Thanksgiving with my family at our home in California, which was a real treat. Last year, my boyfriend and two very close friends of ours had our own make-shift Thanksgiving, which was great as well, but getting to be with my family this year on one of my most favorite holidays was truly special.

We celebrated the holiday at a family friend's house and most of the food was taken care of. My dad and I, however, couldn't resist contributing. He made his famous 'iç pilavi', which I watched him prepare this year. This Turkish specialty consists of rice with pine nuts, dill, currants and other yumminess but because it is a family recipe passed down from my grandmother, I won't be sharing the recipe. Some secrets have to remain secrets, don't you think? 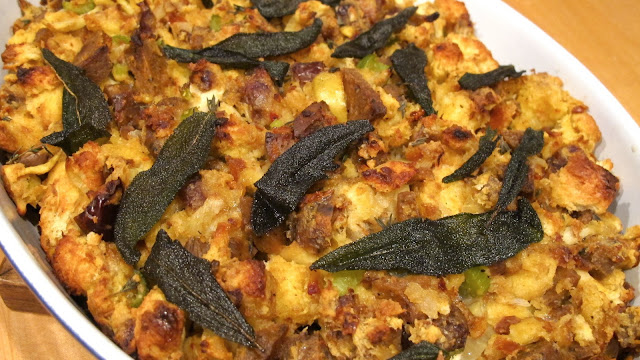 I decided on a vegetarian stuffing. Despite stuffing usually having bits of turkey or chicken broth in it, if I'm not mistaken, it has always appealed to me. Turns out stuffing is super easy to make! I used this recipe from The New York Times and was delighted by the results.  Speaking of, if you didn't have a chance to check out The Times' Vegetarian Thanksgiving Interactive Feature, you must do so. They have so many amazing vegan and vegetarian Thanksgiving recipes that it surprises me that anyone would even bother with a turkey. I am always thrilled that this prominent newspaper makes Thanksgiving extra special for vegetarians as well as omnis. I really believe times are changing- did you know that 'vegetarianism' was trending on Twitter during Thanksgiving week? Can you believe it! I think it's pretty cool.
Back to the stuffing! I made a few minor changes to the recipe, but all in all, I would say the stuffing was a success. It was gone before anyone had a chance to go for seconds- guess I underestimated the power of Tofurky sausage.
1. I used 3/4 stick of butter instead of the full thing. This is something I almost always do. No one notices the difference and I find that most recipes contain way more butter than necessary. I totally could have gone with only 1/2 a stick, but when cooking for suspicious non-veggies, butter helps!
2. I couldn't find chestnuts so I omitted them.
3. Instead of figs, I used Medjool dates, which I love and I think they worked fine.
4. I've never even heard of this spice 'quatre épices', so I just left it out. (On further investigation, turns out its a mix of pepper, nutmeg, clove and ginger). Didn't miss it.
5. My dad and I added fried sage at the last minute as a garnish. 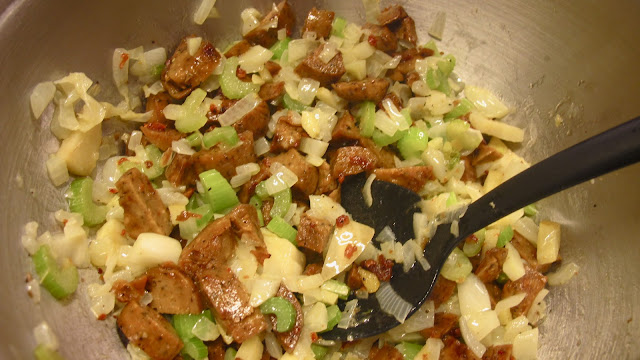 I thought this stuffing was delicious but it could have been a bit more moist. With the addition of gravy, though, it was just perfect.
And just for fun, here is a photo of the turkey I sponsored this year, from Farm Sanctuary. For $30, you can choose which turkey you want to sponsor, and know that you did something good for turkeys on the big day. PS: how cute that they listed his favorite foods! 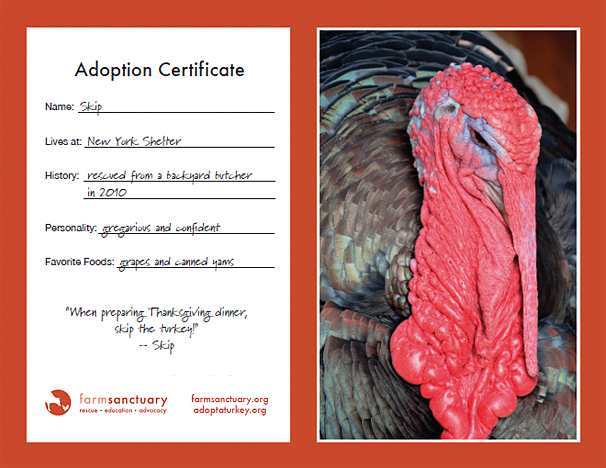