When you start the day with banana pancakes, you know your day can only get worse. After all, nothing you do can possibly top those delicious fluffy not-too-sweet flapjacks. I didn't intend to make vegan pancakes this morning, but alas we were out of eggs and I was not about to head out into the freezing cold just for an egg. There are actually many great vegan pancake recipes online; in fact, I'd dare say you can find a vegan version of most any favorite dish.

The recipe I used was one by Isa Chandra Moskowitz, from her cookbook titled 'Vegan Brunch'. I've yet to review this book, but it's a classic as well. Fans of breakfast should definitely think about picking it up.
Wouldn't you say that there are two kinds of people- those that love breakfast and those that hate it? I think so. My fiance belongs to the former, while my sister belongs to the latter. I'm crazy about breakfast; I would rather have breakfast and not eat all day, than NOT have it. 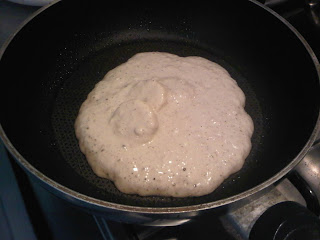 Anyway, on to the recipe!

Now the original recipe called for 2 tablespoons canola oil, but I used just 1 and it was fine. Also, it calls for 1 cup soymilk but I didn't have any! So I just mixed 1/2 cup of soy creamer with 1/2 cup water, which also worked out just fine. I've learned to not be afraid of making little substitutions like this, as most of the time, you won't have exactly the ingredients called for and if you wait till you do, you'll never make anything! 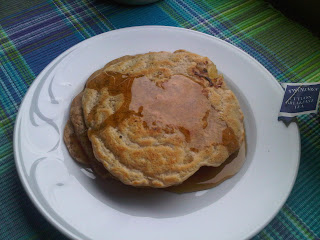 The real delicious addition I made was to add a chopped banana to the batter. This was awesome! If you coat the bananas well before pouring the batter, they won't burn. I highly recommended this addition, as it just adds a whole 'nother layer of goodness to your breakfast (plus you get 1 serving of fruit in that way).
Normally, I like to add fresh or frozen fruit on top but I didn't have any so I just topped mine with some real maple syrup. Real pure maple syrup is all natural so it's better than something artificial or super processed, but agave would have been the better choice to not make my blood sugar spike so much. But, it's okay once in a while, and I don't eat pancakes everyday.
This is a delicious and super easy recipe that doesn't call for a lot of ingredients. If you happen to have some different fun flours on hand like rice flour or even better whole wheat flour, I would recommend subbing half the white flour for that. It'll add depth of flavor and be a lot more nutritious than white flour.
I really wanted to try this recipe by Londonfoodie, but it'll have to wait till next time.
What's your favorite pancake recipe?
Posted by E at 3:54 AM