It's no secret that I love all incarnations of breakfast food. French toast, pancakes, eggs, hash browns, Turkish 'tost', menemen (turkish breakfast dish consisting of eggs, tomatoes, peppers and cheese (optional), croissants and everything in between. 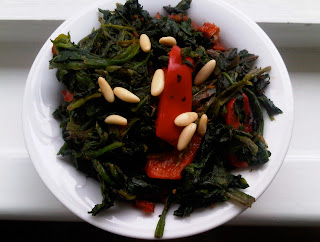 But I like to enjoy these dishes in moderation (once a week, maximum), so as to keep it special and because I don't believe these are nutritionally sound dishes that should be consumed on a daily basis.
My favorite way to start the day is with a spinach saute. The dish consists of sauteed spinach + whatever else we have lying around. What's fun about this dish is that you can pretty much add any veg to it, depending on the season and it still tastes great. In the winter, we make it using spinach, sun-dried tomatoes, peppers (red or green) and a teaspoon or two of olive paste. In the summer, spinach, fresh tomatoes and olive paste. It tastes delicious every time and starting the day with something green sets a good tone (at least for me).

On a separate note, I am totally obsessed with tomatoes. I have apparently been a fan ever since my father forced me to try one (it was that or bedtime, I think). As soon as the bright red, juicy flesh touched my lips, a smile spread across my chipmunk-like 5-year-old face. Even so, I have serious beef with being able to get tomatoes in the winter. We shouldn't be able to! I know, globalization and the changes in the food industry in recent years mean you can get anything you want, anywhere in the world, but why bother if it's not even going to taste good?


The tomatoes you find at the market in winter are 'nominal tomatoes' as I think Micheal Pollan had said in 'Food Inc.'. They are only tomatoes in name and nothing else. This is why I try to refrain from eating them raw in the winter, and would rather wait out for the real deal in the summer. It's also more exciting to enjoy fruits and vegetables in season. If you allow yourself to have everything all the time, there is no anticipation, and then you won't look forward to the seasons changing as much. (Maybe this is also a good metaphor for life, too?)

Cooking directions: Saute two cups of frozen spinach in 1-2 teaspoons olive oil. Add chopped red peppers or sliced mushrooms and sun-dried tomatoes. Saute a few minutes until the veg are soft and spinach heated through. Finally add a teaspoon or two of olive paste and mix to combine.
Healthy tip: The less you cook the vegetables the better, as longer cooking times reduce the vitamins and minerals.
Posted by E at 6:31 AM