Tonight I wasn't really in the mood to cook. I was at a funeral for part of the day, and the weather has been just awful here- muggy, gray, rainy. Usually, I like gray weather. Being that I'm from California, gray skies are appreciated, because most of the time, we get to enjoy 70-degree weather. Not in Istanbul apparently. It's been like this for a week, and not only does this weather make me extremely lazy, but it puts a major damper on my running schedule as well. Yesterday my 5-mile run was miserable thanks to rain that started after merely 2 miles.

Anyway, so I wasn't in the mood to cook. But my fiance is coming over, from the Asian side, and I wanted to do something special. I flipped through my cookbooks, but wasn't feeling inspired. I was just about to resort to take-out when I remembered this blog. I hadn't posted today and I didn't want to let you (is there anyone out there?) or me down. 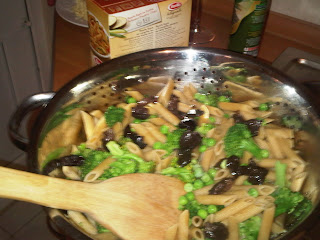 I ended up cobbling together a homemade mac n cheese recipe, which is basically a riff off of Smitten Kitchen's 'easiest baked mac-n-cheese'. It was SO easy and took maybe all of 30 minutes, including the time it took for the water to boil.
The original recipe doesn't even require that you boil the pasta beforehand, but since I was using whole wheat penne, I wanted to make sure the pasta would be cooked (and whole wheat takes a bit longer than normal pasta, so I parboiled it). Parboil, by the way, is a fancy word for partially pre-boiling.

In addition to replacing the elbow macaroni with whole wheat pasta (an easy and healthy swap for Type 1 diabetics, and everyone really), I added broccoli florets (which I tossed into the pasta water towards the end), frozen peas (which thaw out immediately) and a handful of black kalamata olives I had lying around. I always think of Bethenny Frankel, of The Skinnygirl Franchise, in moments like this as she would always say, 'use what you have!'.

The sauce consists of drained yogurt (which I replaced the cottage cheese with as I didn't have any), milk (a mixture of normal and soy, as that's all I had), salt, pepper and cayenne.

I used a mixture of Grana Padano, which I've been using more frequently here as its much cheaper than Parmesan, and Emmenthal.

I did mix up the recipe quite a bit, but I'm confident it'll turn out well. All that really matters is that I didn't resort to take-out. Hence the name of this post: homemade anything is always better than take-out!
You end up feeling better cause you didn't spend money, you got to get creative in the kitchen and hopefully your loved ones will end up feeling spoiled because you toiled away for them.
Now here's hoping my sister doesn't cringe at the sight of the kitchen!

I'll share photos of the finished product after it's been baked.
As promised, here's the final product: 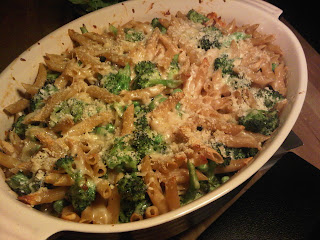