Potato and Artichoke Gratin with Spinach 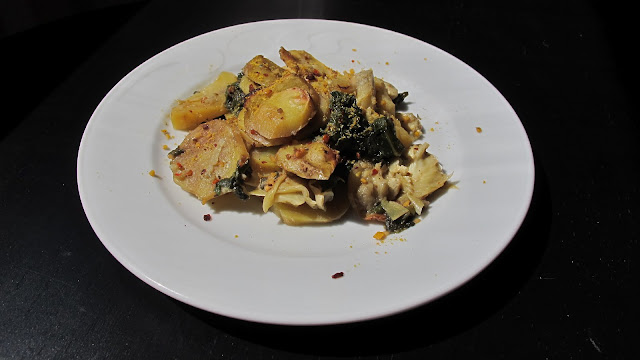 My tummy has been seriously finicky recently. About a month ago I got a serious bout of food poisoning and ever since then, it hasn't been the same. It's not a big deal but it's frustrating because I used to have an iron stomach. I could eat anything (vegetarian) and be fine. No matter the quantity or richness of the dish.


But maybe that's not such a good thing. Maybe that allows you to be unnecessarily reckless with your diet (I'm looking at you, medium cheese pizza!) Now I have to take care to choose the right foods for my stomach and feed myself right. For me, that means lots of fruits and vegetables, plenty of grains and limited dairy. Dairy definitely seems to be the culprit whenever I'm feeling queasier than normal.


Thus, I am going to be making an effort to cook more vegan dishes around here. Having said that, I always run the risk of becoming too strict with myself, so I don't want to rule out dairy and in particular cheese for good. I just want to only enjoy the best and smelliest cheese out there and not waste my time with less than stellar crappy cheeses. And please continue stopping by even if you're afraid of vegan food. I'd like to show that it doesn't have to be so gross and tasteless.
This is where Robin Robertson's '1000 Vegan Recipes' has really come in handy. As I've mentioned before, her book is pretty awesome and yes, it's vegan. But don't write it off right away. Seriously, almost all of the dishes look delicious and it doesn't call for lots of weird ingredients. Not a fan of fake meat? Stay away from the tempeh and seitan section. Plus, I have actually un-veganized some of her recipes (which is probably blasphemous) and still enjoyed them immensely.


So back to the recipe at hand. A few days ago my stomach was acting up again, so I wanted to make something simple and carb-y to soothe my stomach. I was attracted to this gratin recipe because it doesn't have cheese in it and utilizes two of my favorite vegetables, artichokes and spinach. In fact, even better, artichoke hearts.

The recipe is super simple and would be even more so if you have a mandoline. I didn't and had to slice the potatoes by hand. This dish reheats well and was just what the doctor ordered. It was filling without being so wild that it upset my stomach. I would definitely recommend it. And for those of you who can't imagine a non-cheesy gratin, I simply added some shredded gruyere for my roommate and she loved it as well.


*For the record, I used the potatoes I found at the market that looked good and then looked up what they were called online later. I used 6 small Kennebec potatoes in place of the 2 large Russet potatoes Robin calls for, but I'm sure you could be fairly creative here.


Instructions:
1. Preheat oven to 375° F. Oil a casserole dish and slice up the artichoke hearts.
2. Heat the oil in a pan and sauté the garlic and spinach until wilted.
3. Layer the sliced potatoes in the dish, add a layer of artichoke hearts and then the spinach. I drained the spinach a bit, FYI. Continue doing so and end with a layer of potatoes.
4. Season with salt, pepper and red pepper flakes.
5. Combine the broth and nutritional yeast in a bowl and pour over the gratin. Bake for 40
minutes or until the potatoes are baked through and browned.

This dish goes great with a side salad and can even be enjoyed cold. Or maybe that's just me- I prefer everything cold.
Posted by E at 9:34 AM