My best friend and her close friend were in town this weekend staying with me. I loved having them here with me but we definitely indulged a lot in delicious food (and drinks!) so I'm back on track now, cooking up a bunch of healthy but delicious recipes.

Have you guys heard of The Sexy Vegan? His name is Brian Patton and he's a blogger and cookbook author. If I'm not mistaken, he was not feeling his best and decided to try a vegan diet. He lost a bunch of weight and is a really fantastic vegan chef that films videos of himself cooking his vegan recipes. You can find all his recipes and videos online at TheSexyVegan.com.

I don't particularly like zucchini all that much. I just don't think it has much of a taste and when it's overcooked, it's absolutely awful. But, I had a bunch in the fridge and was looking for something tasty to make for dinner. I tweeted to The Sexy Vegan asking if he had any ideas and he sent me a video of these chorizo tempeh stuffed zucchini boats that I ended up making. 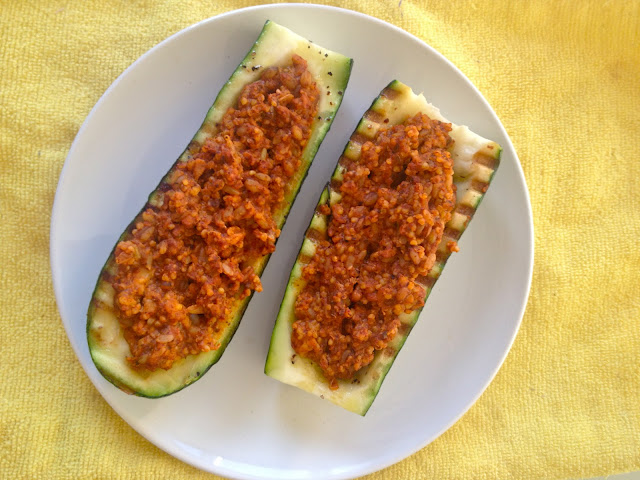 They are so super easy to make and absolutely yummy! I highly recommend you make these as soon as possible. The chorizo tempeh is so flavorful that I imagine it would be great as a vegan taco stuffing or even mixed with some marinara sauce over whole wheat pasta. It's very versatile and I plan on making another batch and keeping it in the fridge for quick dinners (chorizo tempeh, steamed broccoli and quinoa would be great too...)

You can find the video for said recipe here, on his YouTube page, as well as on his blog. The only modification I made to the recipe was in omitting vegan cheese because I didn't have any on hand. I mixed in some nutritional yeast at the end instead.

I served mine with a side salad of red wine vinegar red cabbage salad. It's a Turkish speciality that I adore and I'll have the (easy!) recipe up this week hopefully.